A research professor at Upstate Medical University said it is going to be another very active season for ticks if temperatures continue to rise consistently. Doctor Saravanan Thangamani and his team are doing their part to detect the presence of many pathogens in ticks that could lead to illnesses.  Thangamani said the number of ticks his team receives continues to increase.

“This month so far, we have received about 294 ticks, and the number is changing because, you know, if I go and now check it’ll be like 300 plus because people continuously add on to our system.”

Thangamani's team tests for 17 different pathogens and can test up to 96 ticks at one time.  They’ve found that 35% to 40% of ticks are carrying at least one pathogen, with Lyme disease being the major one they find. Thangamani said that those bitten by a tick should send it into his lab to help put their worries at ease.

“Save the tick and send it to a lab like ours to get it tested because you want to have a peace of mind that the tick that fed on you or attached on you doesn’t carry any pathogens.”

Thangamani also noted that he hopes those who submitted ticks can use his results to aid clinicians to properly diagnose and medicate diseases.  While he believed there will be another spike in the number of ticks once summer arrives, Thangamani said he will be able to get a better projection of activity in about a month.  So far, his lab has collected over 17,000 ticks sent in by the public since 2019, and that will almost certainly increase with warmer temperatures right around the corner.  Thangamani encouraged everyone to use spray to protect themselves from ticks.

John Smith
John Smith has been waking up WAER listeners for a long time as our Local Co-Host of Morning Edition with timely news and information, working alongside student Sportscasters from the Newhouse School.
See stories by John Smith 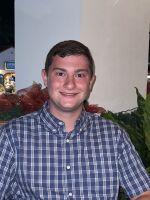