The Skaneateles High School boys golf teams from 1982 to 1992 under the direction of coach Dick Campbell were nominated as the Team of Honor by the Greater Syracuse Sports Hall of Fame.

The teams will be recognized at the 35th annual GSSHOF dinner on Nov.11. During the dinner, seven other individuals will also be inducted into the 2022 Hall of Fame class.

The 1982-1992 teams held a 205-12 record, won 10 league championships and set a New York State record of 92 consecutive match-play victories. Additionally, the team sent 14 players to the New York State Tournament over the course of the decade, when only nine Section III players across the state can qualify each year.

The Lakers are also the only high school golf team in New York State history to have three consecutive state champions: Tom Scherrer in 1988 and 1989 and Jon Doctor in 1990. Scherrer went on to play in the PGA Tour and won the 2000 Kemper Open. 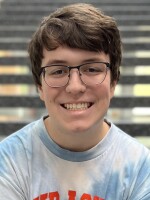 Travis Newbery
Travis Newbery is an undergraduate student studying film at Syracuse University's College of Visual and Performing Arts, expected to graduate in May 2026. As a field researcher he helps cover community meetings and events for WAER, and as a web writer he helps manage online content. Travis hopes to work as a film editor or in the broadcast journalism industry.
See stories by Travis Newbery