The city of Syracuse is getting its first ever director of the Mayor’s Office to Reduce Gun Violence.

Pastor Lateef Johnson-Kinsey is stepping into the role and brings 15 years of violence intervention experience. Johnson-Kinsey will work with other groups already trying to reduce the use of firearms and boost efforts to keep residents from turning to violent crime in the first place.

"It is an effort that is done by a community and neighborhood that sticks together that communicates with each other, and that's my goal," Johnson-Kinsey said. "To make sure that all organizations throughout Syracuse work together and communicate together to reduce gun violence.”

Mayor Ben Walsh announced the office in his state of the city address earlier this year. Walsh says the city has experienced a high rate of gun violence and he vowed to curtail the problem.

“We have people in our city every day directly and in-directly being traumatized by gun violence," Johnson-Kinsey said. "It is unacceptable, it's unsustainable and it is our duty, our obligation to do everything in our power to address it. This is the most recent example but certainly won’t be the last.” 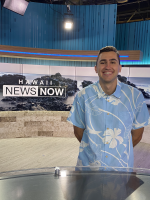