Robert Rohrhirsch knew his Chipotle order from the first time he walked in. His first trip to the fast food joint came on one of his first days after moving to America from Germany. His teammates brought him.

“We had such a good time sitting there, laughing,” Rohrhirsch said. “I spoke my English which was so bad. and they were all like laughing, with me though, about my English. We were all laughing together just because the way I was talking it wasn’t understandable for everyone, but they like, found it funny.”

The transition wasn’t quite as smooth for fellow LeMoyne Dolphin Magda Aspholm. She ended up coming to America a full semester later than she had originally planned due to complications securing a visa.

Once she arrived, however, food is one of the many ways that she learned to cope. Her favorite tradition? When her teammates cook her pasta. She said it reminds her of home.

“And that kind of makes me feel like home because it feels like my mom is making me dinner,” Aspholm said.

Some of the countries with the most athletes included Canada, the United Kingdom, Spain, Australia, and Robert’s home country of Germany. But it also includes nations like Vanuatu, Togo and Eritrea.

Both athletes say that having other international athletes to lean on helps them get through the day-to-day grind.

“It’s nice to have people from the same area that understands you more, if you know what I mean,” Aspholm said.

Having those other athletes is one of the many reasons Rohrhircsh picked LeMoyne in the first place. He was able to speak with students going through the transition he was getting ready to make.

“They brought me in touch with Marek Reber, who was a German soccer player here at LeMoyne back then,” Rohrhirsch said. “And I could ask him all these questions because obviously I didn’t know what life looks like in the US, or college life at all. I had no idea.”

“It gives some of our other students that probably grow up without seeing any internationals until they get to college, it definitely adds a nice experience for them to see different cultures,” Lane said.

Aspholm said the most difficult thing about it all is that she can’t speak to her family back home as often as she’d like to.

Rohrhirsch echoes Aspholm, but said that one thing that makes it easier for him. Regardless of what time the game starts, he knows his parents are up and watching in Germany.

“They watch every game,” Rohrhirsch said. “My mother most of the games, my father watches every game. So even if we play at 7 p.m. here, what is that, 1 a.m. in Germany? He stays up. He has to go to work at 6 or something, but he stays up until 3 a.m. to watch our games.”

Another big factor for Rohrhirsch is that on the field, there’s no language barrier.

“Everybody speaks the same language on the field,” Rohrhirsch said. “It is like that, so, when you’re on the field and you fight together with your teammates and just get that win, it’s amazing team bonding I would say.”

Both athletes said they call Syracuse a second home, a big step for both of them. 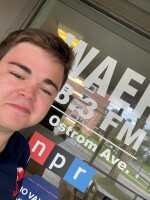 Joey Semel
Joey Semel is a Broadcast and Digital Journalism student from McLean, Virginia. Joey earned his undergraduate degree in communication at Denison University, where he expanded on his passion for sports and journalism At WAER Joey works as a Student Features Reporter primarily covering sports.
See stories by Joey Semel