Student attendance was the first issue raised at the most recent Syracuse City School District community meeting. The public discussion on Tuesday evening is part of a conversation series hosted by Interim Superintendent Anthony Davis.

Several attendees at Tuesday’s session said students who aren’t showing up to class can get into trouble if out unsupervised. Davis said he's open to ideas for addressing challenges, but noted truant students make up only a small percentage.

New York state data shows 91% of students attended school for the 2019-20 school year, the most recent year data is available. But high schools in the district reported lower rates. At Corcoran High School, 86% of students attended during the year, and Nottingham had an 83% rate, according to the state education department. The figure for Henninger High School was the lowest at 80%.

Davis said the goal of the conversations is to improve collaboration between the district, parents, and the community.

“I mean, we have many ideas. It’s just to formulate those ideas and put them down on paper, and start to come up with an actual plan. I purposely didn’t want to do that alone, I wanted people sitting at the table that’s going to own it," Davis said.

Suggestions included having posting staff outside at drop-off locations to ensure students enter and boosting communication between the district and parents. However, Davis said some parents may not feel comfortable confronting students because it could result in an argument or conflict.

Another community conversation is set for Thursday evening at AME Zion Church on South Salina Street. 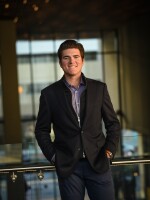 Nico Horning
Nico is an undergraduate student studying Broadcast & Digital Journalism at Syracuse University's S.I. Newhouse School of Public Communications, expected to graduate in May 2026. As a social media manager and field researcher he helps manage online content and helps cover community meetings and events for WAER. In his free time, Nico enjoys attending sporting events, skiing, and golfing. He is proud to call Sacramento, CA home and hopes to become a play-by-play commentator for a professional organization or network after he graduates.
See stories by Nico Horning