After the announcement of its new manufacturing plant, county and Micron officials are looking ahead to the work that must be done in preparation.

Onondaga County Executive Ryan McMahon said at a Monday town hall about the semiconductor facility that the plant will bring job opportunities before it even opens. He said work the project requires infrastructure upgrades, such as water management and road repairs.

"We'll have an idea of what those look like probably in the second quarter of next year, and then work what do we begin, obviously, concurrently—but this is going to be an ongoing construction project, that just building the building, but building the infrastructure to service the needs of the building," McMahon said.

When the plant opens, Micron officials estimate the median income for employees will be just over $100,000. The company representatives shared details at the first town hall discussion hosted by McMahon.

“I think they're gonna explode over the next three to five years. I used to live in Clifton Park, outside Albany. And when they announced that a chip plant was going into Marcy, the property values jumped six figures. So I see some real potential with the property values in this whole area," Morris said.

More town hall discussions about the upcoming project are expected. 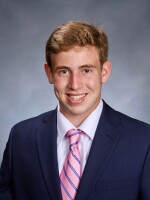 Jude G. Bazerman
Jude is an undergraduate student who is undecided within the Newhouse and Maxwell Schools at Syracuse University, expected to graduate in May of 2026. As a field researcher, he helps cover community meetings and events for WAER. He is a proud New Jerseyan and enjoys spending quality time with his family, friends, and dog.
See stories by Jude G. Bazerman