Micron’s investment in Central New York will go beyond building the recently announced massive chip-manufacturing facility at town of Clay's White Pine Commerce Park. The company has promised $250 million to a community investment fund for projects enhancing the area's workforce—and federal, state and local partners plan to match it.

"Their investment, we believe, this 500 million, half a billion dollar, community investment fund is an order of magnitude that we haven't seen from any company anywhere in the world, as best we can tell," Simpson said.

CenterState CEO Vice President of Economic Inclusion Dominic Robinson agreed. He said these kinds of agreements usually focus only on project development, not the community as a whole.

"Construction participation, you know, making sure that there's workforce getting into a job site relative to the actual construction of the project. Or that there's MWBE [Minority and Women Owned Business Enterprises] firms that are getting sub-contracted out by big general contractors," Robinson said. "The holistic approach that this $500 million represents is really what, beyond the scale, it's the nature of it that makes it unprecedented."

Part of that holistic approach means putting funding toward a range of areas. Simpson said the money will go toward several initiatives, such as bolstering workforce development and education programs to help prepare Central New Yorkers for incoming jobs and enhancing the region's cultural amenities.

The fund will also support housing initiatives, both building new homes and protecting low-income families and individuals from rising prices.

"We've seen that in other communities where there have been large-scale semi-conductor investments. Prices in homes go up. We want to make sure that, while home appreciation is a positive thing, it's a sign of economic growth, there are economic downstream consequences for people who may not have a home or who may be worried they're going to get priced out of the home market," Simpson said. "We have to be acknowledging those risks and taking care of those people the best we can."

Simpson said Micron’s values are one of the things that make the company coming to the region so exciting. The company estimates its project will generate nearly 50,000 jobs in the region, including 9,000 directly with Micron.

They plan to begin site preparations in 2023, with construction scheduled for 2024. 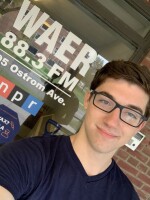